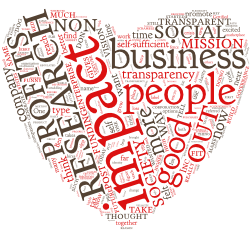 We have gone through an identity crisis recently as we have tried to figure out who we really are as a company. Since the beginning of this whole venture, we have felt like we have been straddling the fence between a profit and non-profit organization in our desires to promote research and grow in the way we envision yet have the community support that is so critical for the future of research. We wanted a business structure that took the best parts from both!

We have a mission that is the most important reason that we are doing all this to begin with—and we believe in it. We are so excited about it. But at the same time we have some great business ideas to promote this new paradigm of research. We don’t want to have to deal with the funding limitations and red tape of the 501(c)(3). We just want to focus on our mission.

Past indiscretions of commercial companies have tainted the provenient pool of scholarly publishing. How can we avoid these pitfalls?

Within the current publishing paradigm we agree with Weller—there is no space for profit to exist without imposing tariffs on either the inputs or the outputs of knowledge dissemination. Those with narrow, profit-centric views have embezzled the scholarly community, in the process setting themselves up as the gatekeepers of knowledge dissemination.

Our vision of the future of research is so different from the modus operandi of scholarly publishing, that I think we have a fighting chance of making a difference without falling into the traps of the current commercial publishers. Our business model does not restrict the dissemination of knowledge, but is based on providing tools and services that help with the actual process of research.

Originally, we felt strongly about doing this as a for-profit company so we could have the flexibility to do whatever it took to promote our mission and generate sufficient profits to extend our reach for good as far as possible. We also wanted to be self-sufficient and not have to worry about the success of the next fundraising campaign. We don’t think that a taxpayer-funded company is the best way to go either. Relying on grants has its own perils in these days of uncertain politics. I don’t like the idea staking our company’s revenue or future completely upon them.

After thinking about it some more, I remembered some companies that I have come to admire. All of them are run by people who have a higher vision of what business can be. They are good companies started by good people that think businesses can be more than heartless profit machines. They have what is sometimes referred to as a double or triple bottom line (people, planet, and profit). One such business, Ben & Jerry’s Homemade, Inc. (you know, the yummy ice cream), gives 7.5 percent of their before-tax profits to charity and purchases brownies from a bakery that hires people from prison. Newman’s Own Inc. contributes all profits to charity. How can we be more like them?

In a way, it’s funny to think about this right now. We are still pre-revenue. Yet, I think now is the time to make these decisions. Funding choices made early in a company’s existence can limit options later on. In general, tech startups are not known for their philanthropy and humanitarian generosities. In too many instances, they are characterized more by a high-velocity scramble to reach the next round of funding, at the same time giving little thought to what it actually takes to build a self-sufficient, lasting enterprise. Burnout hits too soon for too many. Much of this problem stems from the dog-eat-dog world of venture capital investing.1 Does it have to be this way?

I must admit, they didn’t teach us much about this in business school. Being a researcher at heart, I decided to try to find an answer to my question. I found some really cool things. When I stumbled across the term social enterprise, I thought it was referring to an organization that is really good at using Facebook. Nope. In this context, social refers to society—as in for the good of society. It turns out this is a label for the type of business that we are trying to build! I cannot tell you how thrilled I was when I found out that a social enterprise can be structured as a for-profit company.

According to this Wikipedia article,

a social business is a non-loss, non-dividend company designed to address a social objective within the highly regulated marketplace of today. It is distinct from a non-profit because the business should seek to generate a modest profit but this will be used to expand the company’s reach, improve the product or service or in other ways to subsidize the social mission.

YES!!! We finally found out who we are! The pieces are starting to fit together now. We can use the power of business to help solve the problems with research! It is funny, since this doesn’t drastically change our plans or approach, but, hey, I’ll take validation wherever I can find it! It is nice to know what type of company we are and to be able to tell someone else now, too. This definition is very much in line with what we hope this company will be. And I think it gives us some stuff to work on and a much more focused direction to take.

We are not alone in this—other companies are seeing the benefit of structuring this way. Google.org, was structured as a for-profit charity. It was an experiment by Google to change the way philanthropies are administered. While some problems arose in Google.org’s implementation, their structure is not limited in the ways that traditional non-profit organizations are limited. For example, it can create or invest in businesses, lobby Congress, and seek funding from venture capitalists. It also pays income taxes.

We differ the most from Google.org in that we need to make a profit to survive and to promote our mission, and maybe this is where Google.org went wrong. It acted like a non-profit when it was really a for-profit organization. We want to keep our options open, and have the best parts of both worlds. Yet when times get tight, how can we maintain this status and not fall into the greedy trap of commercialism?

A non-profit by the name of B Lab has created a certification called a B Corp Certification, and is spearheading legislation in some states to create a related business entity called a benefit corporation. They say, “By voluntarily meeting higher standards of transparency, accountability, and performance, Certified B Corps are distinguishing themselves in a cluttered marketplace by offering a positive vision of a better way to do business.” They have put together a governance model to help businesses maintain this high level of transparency, accountability, and performance. This governance model can be baked into corporate bylaws and even state laws in some states. We are excited at the prospect of becoming a benefit corporation in the future, so stay tuned!

You may argue, “But is research good for society?” If you’re reading this post, I probably don’t have to convince you of that.2

Our identity crisis and how we overcame it.

If you’re into copy and paste, use these snippets, listed here in order of decreasing universality, to link to or cite this post.